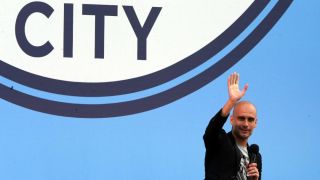 New Manchester City manager Pep Guardiola revealed he almost joined the Premier League outfit over ten years ago in the twilight stages of his playing career.

Guardiola spent the majority of his time as a player at Barcelona after graduating through the youth ranks, before moving to Italy to play for both Brescia and Roma.

After leaving the Serie A, Guardiola moved to Qatar with Al-Ahli, but after two years he set his sights on a move to England.

Guardiola, then 34, had an offer from Stuart Pearce to link up with City ahead of the 2005-06 season, but decided it would not have been a good move for both him and the club.

"I have to say something - Stuart Pearce was right [not to sign me]. Definitely," Guardiola told the City website.

"I came here at 33-34 years old and in that time as a football player I was definitely a disaster. It was so intelligent not to pick me up.

"My dream in that time was to play in the Premier League. He offered me one half year - not a complete season.

"I had to wonder about family, I cannot live without them and in the end we didn't decide [to sign].

"When you analyse in that moment my physical condition I think it was the right decision. Don't pick Pep up."