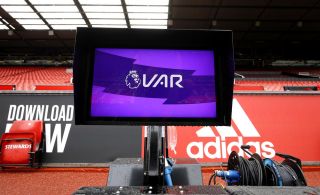 Former Premier League referee Keith Hackett wants a change in the VAR process and further training during the international break, saying: “The situation is untenable.”

Controversy continued to dog the new system over the weekend, with Aston Villa and Watford aggrieved while Leicester’s Youri Tielemans had a lucky escape.

Hackett wrote in the Daily Telegraph: “The international break has come at a good time for the Premier League’s referees because they are really struggling with the video assistant referee process.

I am bemused by the poor procedure that the PGMOL have adopted with VAR. Aston Villa denied a goal by a very poor decision by the referee to caution a player for simulation. It was a foul advantage should have been applied and goal confirmed. VAR is in place to rectify S&O error— KEITH HACKETT (@HACKETTREF) August 31, 2019

“I have always been a big supporter of technology but we are seeing no consistency in how or when it is used. Referees are looking foolish.

“The situation is untenable and I hope that Mike Riley, who oversees the elite refereeing panel, calls them together over the next fortnight so there is a consensus on what constitutes a clear and obvious error and when the VAR should intervene.”

Tielemans went unpunished after catching Bournemouth’s Callum Wilson on the ankle with what Hackett, Riley’s predecessor as general manager of Professional Game Match Officials Ltd (PGMOL), described as “the definition of a dangerous and reckless tackle” and “precisely the reason VAR was introduced”.

Villa had a late Henri Lansbury equaliser disallowed after referee Kevin Friend penalised Jack Grealish for diving in the build-up – Hackett accepted the goal itself could not be awarded, with the whistle already having gone, but said Gary Cahill’s challenge on Grealish “was a foul inside the area” and would “merit a penalty being awarded”.

West Ham were also denied a penalty after Norwich midfielder Tom Trybull’s challenge on Sebastien Haller, while Newcastle scored against Watford despite the ball bouncing off the arm of Isaac Hayden in the build-up.

Even a slight and accidental touch off an arm which scores or creates a goal is automatically punished, without the usual “clear and obvious” caveat for VAR intervention.

Wolves and Manchester City have already learned that the hard way this season, with disallowed goals for Leander Dendoncker and Gabriel Jesus respectively, and Hackett wrote: “This makes VAR look foolish because of a lack of consistency. For this incident to have a different outcome is difficult to justify.”

Hackett believes a key part of the solution is for on-field referees to review decisions themselves on the pitchside monitor when prompted by the video assistant referee at the Premier League’s Stockley Park hub.

“Riley could ask the referee to use the pitchside monitor to make the final decision, rather than the video referee,” he continued.

“In England we have decided that the officials in Stockley Park will make the final call. It compels the video referee to decide what constitutes a ‘clear and obvious’ error, rather than a referee deciding themselves they have got a decision wrong.”