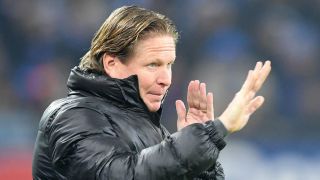 Markus Gisdol has been dismissed by Hamburg after rock-bottom Cologne inflicted a fourth successive Bundesliga defeat on them.

The German was hired in September 2016 after Hamburg had failed to win any of their first five league games of the season and he ultimately helped them avoid the drop, finishing 14th.

Suitably impressed with his impact, Hamburg gave Gisdol a new contract until the end of June 2019 in March last year.

However, they have gone backwards so far this season and sit second from bottom with just 15 points from their first 19 matches.

Following yesterday's 2-0 defeat to 1. FC Koln, the board and sporting director Jens Todt have made the decision to relieve head coach Markus Gisdol and his assistants Frank Frohling and Frank Kaspari of their duties at the club.More to follow... January 21, 2018

And a 2-0 defeat at home to Cologne – who had only won two previous league games this season – on Saturday proved to be the final straw, as it took their losing streak to four.

Gisdol said after the loss that that he predicted a "brutal" second half of the season, but he will not be the coach presiding over it following Sunday's news.

Speaking to the club's official website, chairman Heribert Bruchhagen said: "No one wants to part with coaches prematurely, but we believe a fresh impetus is desperately needed if we're to realise our season objective of staying in the Bundesliga."