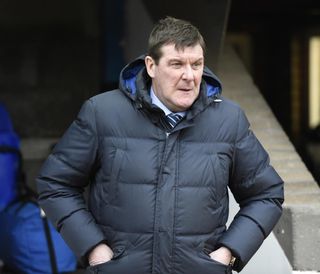 Tommy Wright insists St Johnstone will be going all out to finish the season on a high at Hamilton as Accies’ battle to avoid the relegation play-off comes down to the final day.

While the McDiarmid Park club have long been safe from relegation and are the best of the bottom half of the table in seventh place, Accies go into their last Ladbrokes Premiership game of the season just one point ahead of St Mirren, who are second-bottom.

The Buddies travel to already-relegated Dundee and will swap places with Brian Rice’s side if they better Hamilton’s result against the Perth men.

Wright, however, stressed that his side are looking to win for themselves.

“You want to win football matches. They are professional footballers, that’s their job. I have no worries that they won’t approach it other than in the right manner.

“We go there to look after ourselves. It is neither here nor there to me who is the team in the play-off. My focus is on making sure that St Johnstone get another win.”

Wright reflected on “another successful season” despite the disappointment of losing out on a top-six spot.

“No matter where you finish you are always looking for better. I think it has been another successful season, another year where we have guaranteed our place in the top league.”

Wright revealed 17-year-old striker Olly Hamilton will be on the bench at Hamilton.

He said: “He’s a young striker who is leading scorer in the youth team, he has scored 23 or 24 goals and can play wide or through the middle. He will get his first appearance on the bench.”