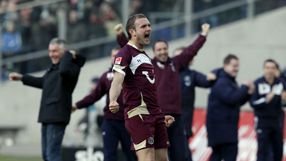 Bayern were desperate to beat Hanover to stay in the hunt for the second place that grants an automatic Champions League spot but the third defeat in as many games left them seven points off second-placed Bayer Leverkusen, who disposed of VfL Wolfsburg 3-0 to climb to 49 points.

Bayern club bosses had warned their Dutch coach second place was their minimum target but it was Hanover who were livelier, scoring through Mohammed Abdellaoue and Konstantin Rausch before Sergio Pinto added another after Arjen Robben had briefly pulled one back.

Bayern, with only the Champions League trophy left to fight for, were reduced to 10 men in the 73rd minute when defender Breno kicked Lars Stindl and was sent off.

"My players were under a lot pressure going into this game," Van Gaal, in his second season at Bayern, told reporters. "After the first goal it got even bigger."

As for his future at the club, the 59-year-old former Barcelona and Netherlands coach said: "That is up to those in charge. I continue with my work but obviously after the third straight loss it becomes tricky."

Bayern's third straight defeat in all competitions, after their German Cup exit to Schalke 04 in midweek, left them in fourth place on 42 points, with Hanover third on 47.

Runaway leaders Borussia Dortmund are 12 points clear on 61 after their 1-0 win over Cologne on Friday.

Last-placed Borussia Moenchengladbach cut the gap to the relegation play-off spot to three points by beating Hoffenheim 2-0 while VfB Stuttgart for the first time in months dragged themselves off the bottom places with a 1-0 win over Schalke.

Hanover got off to a dream start when Norwegian Abdellaoue caught the Bayern defence napping to slide in and connect with a low Rausch cross after 16 minutes.

Rausch got a goal himself six minutes after the re-start when he whipped in a fierce, left-footed shot.

Bayern responded with Robben who headed in a Franck Ribery cross but a blunder from their keeper Thomas Kraft, when he failed to hold on Pinto's 25-metre shot, restored Hanover's two-goal cushion in the 62nd minute.

Leverkusen, with Michael Ballack asking to be excluded from the squad as he still lacked fitness, scored three times in the first half to quickly take the wind out of Wolfsburg's sails.

Germany striker Stefan Kiessling rounded off the scoring in first half stoppage-time after Lars Bender and Renato Augusto had scored from almost identical positions on the right to leave the 2009 Bundesliga champions Wolfsburg anchored in 14th spot, one point above the relegation play-off spot.