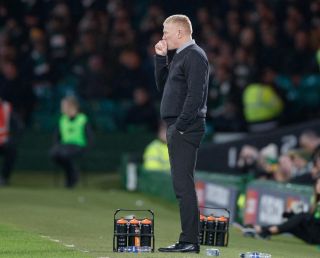 Gary Holt believes his Livington side are reaping the rewards from implementing the pictures painted for them at training.

The West Lothian outfit have won five games in succession, including one in the William Hill Scottish Cup, and sit fifth in the Ladbrokes Premiership table.

The Livi boss hailed the 1-0 home win over Motherwell on Saturday as the most complete performance of his Lions’ tenure and hopes his players continue that form at Ross County on Wednesday night.

Holt said: “From the first minute to the last minute we were at it in our movement, our tenacity, getting in people’s faces and then when we got the chance to play.

“We are trying to implement things, show them things and educate them with the analysis that we do.

“The training sessions we do is painting pictures for them to try to implement and I felt on Saturday that more and more what we have been doing in the week came out.

“The movement off the ball, movement beyond the ball, supporting the team-mates when the ball went forward was really pleasing to see.

“It was good and you just hope it is another wee building block for them to see how good they are and what they can achieve with, first and foremost, hard work.”

By contrast to Livi’s form, the Staggies are without a win in eight games in all competitions and sit ninth in the table.

Holt’s side have scored four goals in both league wins against County this season but he believes there is not too much wrong at the Dingwall club.

He said: “I wouldn’t say they were off-form. There have been spells in games when that they have been really good.

“The games that I watched, even in Saturday’s game (a 3-1 defeat to Kilmarnock) they were well in the game.

“As you find at this level, and as we found the early part of the season, you make mistakes, you get punished.

“You make the mistakes in the Championship and get away with it and that is what they are probably finding.

“But I think they play excellent football, they score goals and they are finding the little risks they are taking sometimes is not getting the rewards they are meriting.”