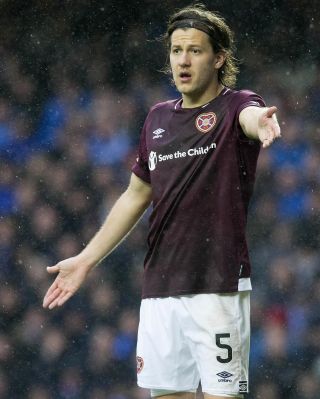 Former Luton player Lee has been ruled out for two-and-a-half months after twisting his knee early in Sunday’s league defeat by Celtic – who they face again this weekend.

But Haring has handed boss Craig Levein a major boost ahead of facing Neil Lennon’s triple-treble chasers by insisting he has shaken off the groin complaint that has kept him out since last month’s semi-final win over Inverness.

He said: “I’m good to go. I’m feeling really well. I took some days off after getting an injection then started with some work in the gym.

“I started some light running abut 10 days ago and have been doing a little bit more every day.

“It’s been a stressful few weeks worrying whether I’d make the final.

“After the semi-final against Inverness it was quite sore and didn’t get better for about a week.

“That’s why we decided to see if the injection would help and it did help a lot.

“Even then I didn’t know if I’d make the final and just had to see how it went once I started training. But it has felt fine and now I’m looking forward to Saturday.”

Breaking the bad news on Lee’s injury, Levein told the club’s official website: “It’s hugely disappointing news for us, and especially for Olly.

“He twisted his knee on the pitch with nobody around him on Sunday and at the time it didn’t look too good, now we know that he’ll be out for around 10 weeks.

“Missing out on a cup final is hard to take so Olly now has to focus on his rehab and target making a comeback for the beginning of the next league campaign.”

Levein says he will continue to monitor Arnaud Djoum – who has recently been kept out by an Achilles problem – while he expects Harry Cochrane back from the bout of illness that kept him out on Sunday.

Now Haring says the Jambos squad will be fired up by the thought of their stricken team-mate Lee when they walk out at the National Stadium.

He said: “I watched Sunday’s game on TV and they showed the incident a couple of times, so you could see it didn’t look good.

“It’s very disappointing for him but also for the team as well as he’s a really good player.

“We’ll go out and try to win to make sure he and Ben Garuccio, who has also been out a while, don’t miss the celebrations.”

Haring has proved to be a key member of Levein’s squad since moving from Austrian outfit SV Ried last summer.

He admits he found it daunting facing up to Scottish football’s biggest names at first but is ready to take it all in his stride this weekend as Hearts aim to end their seven-year search for a major trophy.

The 25-year-old said: “This will be one of the biggest games of my career – and I’ve had a lot of those this year.

“It’s been the best season of my life so far, my best experiences in football have come this season.

“And Saturday will be another highlight for sure.

“I remember the first time we played Celtic at home I was quite nervous, more than normal.

“Celtic is obviously a really big club and before I signed I was really looking forward to playing at Ibrox and Parkhead.

“After a while playing in these kids of games you get used to it so I don’t expect to be too nervous on Saturday.

“It’s the last day of the season and a cup final. It’s about taking everything you got in your body and putting it all into trying to win a trophy.”