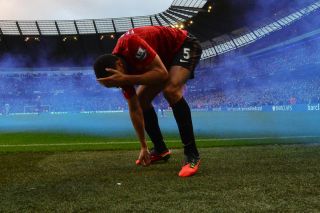 The 26-year-old was forced to intervene as a home supporter got onto the pitch and lunged for defender Rio Ferdinand in United's 3-2 win at City last December, minutes after the England international was left bleeding from a head wound after being hit with a coin thrown from the stands.

Hart does not want to see a repeat of the unsavoury scenes that marred last season's derby at City and has urged for calm from spectators.

"There were incidents last year which no-one wants to see repeated," he said.

"The eyes of the world will be on this game as usual, and I'm confident our supporters will do the club proud.

"Our fans are the best in the world and we want you to show your passion for the club, but in the right way.

"The derby is one of the most anticipated and exciting games in world football. As players, we are all looking forward to Sunday, and we know that the fans will be too.

"The home support is so important for us, and I know they will be like an extra man for the team on the day.

"As always, we need our fans in full voice, but we also need them to respect the occasion. We want everyone to enjoy the game but be sensible too."

Champions United have emerged victorious in three of the last five Manchester derbies hosted at the Etihad Stadium in the Premier League.