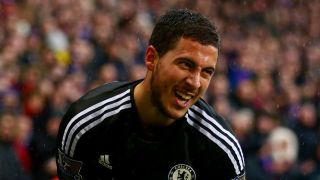 Eden Hazard's struggles this season took another unfortunate turn on Sunday when the Chelsea star limped out of the Premier League match against Crystal Palace after just 16 minutes.

The Belgium playmaker appeared to suffer a groin injury after cutting inside to shoot in the ninth minute and he signalled to the away bench at Selhurst Park that he was unable to continue during a break in play shortly afterwards.

Hazard failed to complete last month's 2-1 loss at Leicester City due to a hip problem - a match that proved to be Jose Mourinho's last in charge of the ailing champions.

The 24-year-old former Lille man sat out the subsequent 3-1 win against Sunderland and returned as a substitute in the 2-2 draw against Watford.

Despite starting in a central attacking role for the goalless draw with Manchester United last time out, the reigning PFA and Football Writers' Player of the Year remains without a goal to his name this season.