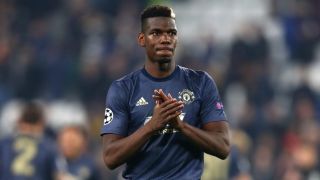 Paul Pogba will miss the Manchester derby because of his "sacrifice" after picking up an injury against Juventus, according to Manchester United manager Jose Mourinho.

United left Turin with a shock 2-1 win in the Champions League on Wednesday, with Pogba playing the full 90 minutes as two late goals secured a dramatic turnaround.

Reports on Friday suggested he was a doubt for Sunday's outing after missing training and his absence was confirmed when United's team sheet had Marouane Fellaini starting in his place.

Mourinho said the France international - who scored twice at City last term - put his body on the line for the team in midweek.

"Paul is injured," Mourinho told Sky Sports before the match. "He was injured during the game in Turin.

"He made that sacrifice for us, and then it was impossible for him to recover for this match."

Alexis Sanchez was also missing from the starting XI, taking a place on the bench as Marcus Rashford was named alongside Jesse Lingard and Anthony Martial in attack.

But Mourinho assured the Chile international has not been dropped and was benched as a consequence of a slight knock sustained against Juve.

"Alexis is an option," Mourinho added. "Maybe the start of the decision was because of his little problem in Turin, but he is completely available for the team."