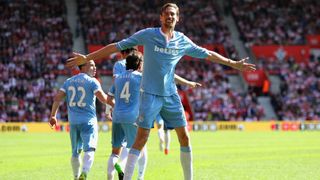 Peter Crouch became the first player to score 50 headed goals in the Premier League on Sunday after netting against Southampton.

Crouch, 36, broke the deadlock at St Mary's against his former club with a trademark goal to hand Stoke City the lead on the hour mark.

Geoff Cameron whipped in a superb cross and Crouch rose magnificently at the far post to plant his header past Fraser Forster and into the far corner.

The Potters hung on to win 1-0, Crouch ending the campaign with six league goals in total.