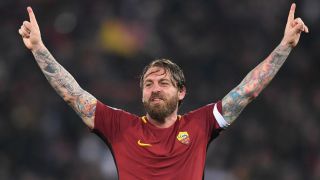 Jordan Henderson is relishing the prospect of playing against Daniele De Rossi when Liverpool host Roma on Tuesday.

The Italians visit Anfield for the first leg of their first Champions League semi-final since 1984, the year in which these teams met in the final.

De Rossi produced a superb performance in the stunning 3-0 win over Barcelona that booked Roma's place in the last four, and Henderson is prepared for a tough battle against his opposing captain.

"Fantastic player, fantastic leader for many years for Roma," he told a news conference when asked about De Rossi.

"He's a huge player and someone who has been around for a long time. He will be used to it, this sort of size of game. He will be looking forward to it.

"But I feel we've got experience in our side, too, maybe not as much as him, but I feel we are ready to go and challenge."

Henderson admits Tuesday's meeting will be "a huge occasion" for Liverpool's players but is determined not to let their focus drop.

"You've been the true star of this European campaign - now let's show our best to the world."Jürgen Klopp's message to fans... April 23, 2018

"You dream of playing against the best teams in Europe, and Roma are certainly one of those," he said. "It will be a fantastic night, but you've got to remain focused.

"When you look back at the game you want to remember it for the right reasons. You want to be able to put in a fantastic performance for the team, but also get the right result as well.

"We must continue to play as we always have this season and keep improving as we go along. It's a big test, a big challenge against a really good side in Roma, but one I feel we are ready for.

"We've got to put on a similar performance – if not better – than we did against Manchester City [in the quarter-finals]. If we do that, hopefully we can get through to the final."

Henderson also praised the impact of manager Jurgen Klopp on the team, describing him as a coach who strikes the ideal balance between personality and determination.

"He's one of the best managers in the world," said the England midfielder. "First and foremost, tactically, it goes without saying how knowledgeable he is. You can see that in our performances and style of play.

"But he's a fantastic human. He's very genuine and has a great passion for football that transcends throughout the team

"He's a fantastic manager who keeps you on your toes, keeps pushing you to improve. He never wants standards to drop and [wants us to] maintain them, no matter who we are playing

"He's an amazing manager and obviously everyone in the squad feels privileged to work with him I feel I've improved a lot since I joined this football club, but hopefully I can keep improving over the next few years."