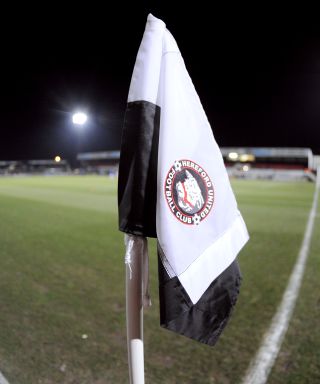 The sanction comes after the Southern League club - relegated from the Football League in 2012 - failed to comply with orders from the Independent Regulatory Commission to answer questions relating to the Owners' and Directors Test Regulations.

Hereford had been given until Monday to submit further requested documentation, but failed to do so.

As well as the club, official Alan McCarthy has also been banned from all football activity.

An FA statement read: "Following consideration of a document submitted by the club, the Independent Regulatory Commission gave the parties until 4pm on Monday 8 December 2014 to submit further documentation to satisfy the orders of the Commission.

"Having failed to provide the requested further documentation by the deadline, both Hereford United and Mr McCarthy shall remain suspended until such time as the order of the Independent Regulatory Commission has been complied with to the satisfaction of the Commission.

"The FA understands the importance of football clubs to their local communities and will continue to work with all relevant parties to ensure senior football returns to Hereford at the earliest opportunity, although this will be contingent on the club complying with the Regulations and subsequent orders of the Independent Regulatory Commission."

Hereford, who sit 15th in the Southern League, had initially been charged over the issue on December 1.