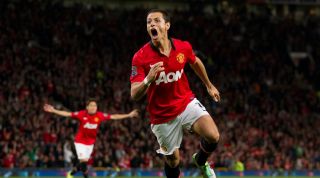 Hernandez signed for the Premier League champions in 2010 and has proved himself as a regular goalscorer ever since, despite being often used off the bench.

The Mexico international has scored 51 goals in 122 career appearances for United, of which just 73 have been starts, but has found himself on the periphery under new manager David Moyes.

The 25-year-old has started just one Premier League fixture this season, and although he says he is happy at Old Trafford for the moment, his burning desire to play regularly may force him out of the exit door.

Hernandez – who appears to be behind Robin van Persie, Wayne Rooney and Danny Welbeck in Moyes' pecking order - told Mexican TV station Telemundo: "I strive for that (to start more games). I am working towards that - earning a spot as a starter.

"I know that my performance on the pitch will allow me to achieve that goal someday either here (in Manchester) or elsewhere for any other club.

"I am going on four years here (at Manchester United) and really, like I have always said, I am happy to be able to play for one of the best clubs in the world, doing my best every single day to earn more minutes on the pitch.

"I just need to be given more opportunities to showcase what I can do, because all of us want to be able to contribute our part so this team can win championships."

Despite being eager for more first-team opportunities, Hernandez enjoys competing with the likes of Van Persie and Rooney for a spot in the team, believing it brings the best out of him.

"What better way to compete anywhere in the world than to compete with them?" he said.

"The competition inside the team has always been really healthy and I think that helps the team a lot, because there are so many quality players that every one of them wants to earn a starting spot.

"The practices and matches coming up will force us to step up and help the team grow both at an individual and collective level."