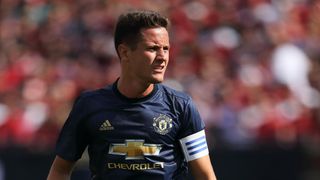 United went down 4-1 to rivals Liverpool in an International Champions Cup clash played in front of over 100,000 fans in Ann Arbor on Saturday.

Manager Jose Mourinho subsequently sympathised with supporters at Michigan Stadium who witnessed a makeshift United side outclassed by the likes of Sadio Mane, Mohamed Salah, Daniel Sturridge and Xherdan Shaqiri.

Herrera, having been left out of Spain's World Cup squad, is one of the few senior players to have been available for United's tour of the United States, which wraps up against Real Madrid on Tuesday.

United will then head to Germany to take on Bundesliga champions Bayern Munich for their sixth pre-season friendly, with Herrera left frustrated by a testing schedule that concludes with their 2018-19 Premier League bow at home to Leicester City on August 10.

"The least important thing is the result right now," the midfielder said to United's official website. "We are playing with the same players every game.

"It looks like a Christmas period to be honest rather than a pre-season, but it is what it is.

"We have to be all together, to try to have minutes in our legs, to not think too much about the results and let's try to keep improving because the most important thing is Leicester."

Fred's debut was a rare bright point for United as substitutes Sturridge and Shaqiri netted to ensure Liverpool stayed unbeaten in their own pre-season.

But Herrera dismissed the 4-1 loss to their rivals as unimportant as United continue to build towards the big kick-off next month.

"But the difference between us and Milan, or Liverpool, is that they have 16 or 17 first-team players and we just have maybe 10.

"We must say thanks to the kids because they are helping and giving everything, so let's try to keep improving and always focus on the first Premier League game against Leicester."