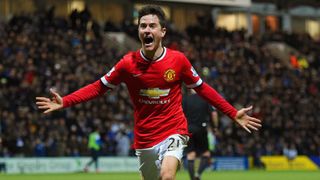 With two goals in his last two appearances the 25-year-old is beginning to show the form that convinced United to bring him to the club in June, but he says there is plenty more to come.

Herrera has set his sights on emulating Scholes' achievements at United, where he scored 155 goals in 718 appearances after making his debut in 1994.

"Paul Scholes is maybe the biggest midfielder in United history," he told the Manchester Evening News.

"I wish one day, I can be so important to the fans, but I have to work very, very hard for that.

"But, I am 25 years old, I have to learn a lot from my team-mates, [and] from great players like Paul Scholes and I want to learn."

The Spanish midfielder moved to Old Trafford from Athletic Bilbao and has scored five goals in 18 appearances in all competitions, however injuries have seen his first-team chances limited.

"Of course, everyone wants to play but we have 25 players or more, maybe. It is not easy to play for Manchester United but I work for that. I like to play, I like to help the team but I like, even more, to win games."