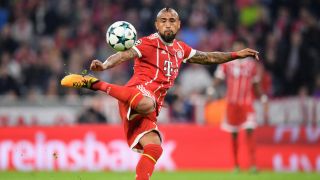 Jupp Heynckes has reassured Bayern Munich's fringe stars they will soon get their chance to shine despite his reluctance to alter the team's winning formula.

German giants Bayern eased to their second successive win in Heynckes' fourth stint at the helm as goals from Thomas Muller, Joshua Kimmich and Mats Hummels sealed a 3-0 win over Celtic in the Champions League on Wednesday.

Sebastian Rudy replaced the injured Javi Martinez and was the only inclusion from the team which thumped Freiburg 5-0 in the Bundesliga last week.

Arturo Vidal and James Rodriguez were restricted to the role of substitutes midweek and with the likes of Niklas Sule, Juan Bernat and Corentin Tolisso also in reserve, head coach Heynckes understands the need to maintain squad harmony.

"It is necessary to develop momentum and win the first few games, either in the Bundesliga or Champions League, where we have ambitions of reaching the next round," the German said at his post-match press conference.

"For that reason, we cannot afford to experiment much with new players.

"But I spoke to all the players that weren't involved today to ensure them that they do have a role in the team, especially with a busy schedule coming up."

Bayern have now taken a maximum six points and scored eight goals since Heynckes replaced the sacked Carlo Ancelotti, but the 72-year-old insists there is still room to improve.

"We created a lot of chances that we didn’t take advantage of and at the other end let them have a few themselves," he said of Wednesday's victory.

"We were a bit negligent there and we cannot let that happen. You need to be completely alert from the first to last minute."