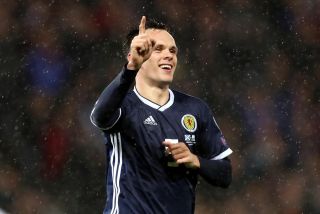 Jack Ross always knew Lawrence Shankland was a natural goalscorer despite managing him during an unhappy spell for the striker at St Mirren.

The pair will be reunited on Sunday when Ross takes his Hibernian team to face Shankland’s Dundee United in the William Hill Scottish Cup fourth round.

Shankland did not score a league goal in his second loan spell in Paisley, although he netted a double for Ross in the cup against Spartans.

His stay was cut short in January as Aberdeen recalled him and loaned him out to Morton.

Both parties went on to enjoy success, with Ross leading St Mirren to unlikely safety from relegation before winning the Championship the following season.
Shankland netted 63 goals in two seasons for Ayr before moving to Dundee United last summer.

He has already netted 25 times this season, including once for Scotland.

Ross said: “I took the job in October and I think Lawrence went back to Aberdeen at the beginning of January.

“You have got to remember at that point Lawrence was a Premiership player with Aberdeen. His goalscoring record has been great but I am sure he would say he wants to play in the Premiership and prove he can play there.

“He has had to find another route back towards that level.

“I know Derek (McInnes) gets asked a lot about him because he had him at Aberdeen and what Derek says is completely fair and accurate, that L has always had an ability to score goals and is a very, very pleasant individual, a really good boy to work with.

“But there’s a maturity about him now. I don’t necessarily mean his game, just an emotional maturity that comes with age, and I think he would acknowledge that.

“The benefit of having that is reflected in his performances and what he has done over the past few seasons.

“If you strip it back to the original question, did I always see that he could score goals? Yes. Any manager and coach that has worked with him (knew that), it’s just making sure all the other parts of his game came together, and they look like they are doing that.

“I haven’t seen an awful lot of him in the flesh over the last couple of years. I look forward to seeing him on Sunday because he was a pleasure to work with and he comes from a good family as well, but I hope he plays poorly.”

Ross could include Stephane Omeonga for the trip to Tayside – subject to international clearance – after the Belgian midfielder returned to Easter Road on loan from Genoa.