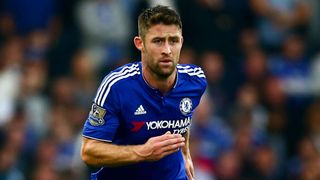 Cahill is suffering with an ankle problem, but Hiddink is optimistic he will recover in time to take on Alan Pardew's side, who are fifth in the table and 11 points better off than Chelsea.

"Gary Cahill didn't train on Wednesday, which means he has a little problem," said Hiddink, who expects Eden Hazard, Oscar and Willian to play after picking up knocks.

"He has an ankle injury - some ligaments are a bit tight - but we have several days to go, so I am not negative about him.

"We had two tough games against Watford and Manchester United. The physical intensity was high in both games, but we didn't have big damage.

"Oscar was a bit hurt after a challenge. Willian got some tackles, so did Eden. There was intensity in these games, but they have been recovering so they are okay."

Chelsea have drawn their first two matches under Hiddink, who has been handed a deal until the end of the season.