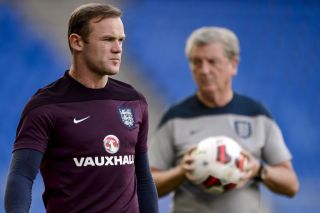 Rooney will miss Manchester United's clash with Everton on Sunday, as well as fixtures against West Brom and Chelsea in October after kicking out at Aston Villa's Stewart Downing last week.

While it was Rooney's first red card in almost three years, the 28-year-old United skipper has still been heavily scrutinised for the incident.

Hodgson, however, has no concerns about Rooney, instead praising the striker's passion ahead of upcoming Euro 2016 qualifiers against San Marino and Estonia.

"People suggested there was a lack of discipline and so on but, in my dealings with him, nothing could be further from the truth," Hodgson said.

"If someone wants to write that Rooney hasn't got the temperament I can't stop them doing it. But they are wrong."

Hodgson added: "Everyone knows Wayne is not the sort of person with his Liverpool accent who is going to be able to stand up in front of a lecture room of people.

"But he doesn't need to. All he has to do is make certain the players he is talking to understand where he is coming from.

"The great thing with Wayne, as it was with [his predecessor] Steven [Gerrard], is the passion that they have for football, for their country, and for their clubs - both were basically one-club men if you take Rooney leaving Everton at a young age.

"They can transmit that passion to a lot of those younger players. They can get their points across. They won't do it maybe quite as eloquently as someone like myself could, but that doesn't matter.

"He will get the message across and the message will be more powerful coming from him. We want to tap into that."