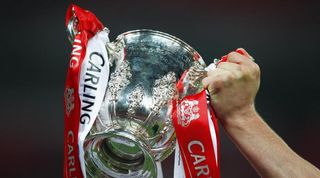 Fresh from beating Burnley 1-0 at Turf Moor, Championship side Wednesday travel to the Etihad Stadium hoping to mastermind a huge shock against the Premier League champions.

Former Swansea City manager Roberto Martinez will take his Everton side to the Liberty Stadium and Alan Pardew's Newcastle United come up against Crystal Palace, a club he used to play for.

Bolton Wanderers travel to Chelsea and Middlesbrough can look forward to an Anfield showdown with Liverpool.

MK Dons' reward for sensationally dumping Manchester United out of the competition 4-0 on Tuesday is a home tie against Bradford City, who came from behind to defeat local rivals Leeds United 2-1 in round two.

Having run out 1-0 victors at Aston Villa on Wednesday, Leyton Orient face Sheffield United, who won on penalties at West Ham.

Shrewsbury Town, the lowest-ranked team left in the competition, have been pitted against Norwich City.

All ties will take place in the week commencing September 22.

The draw in full: