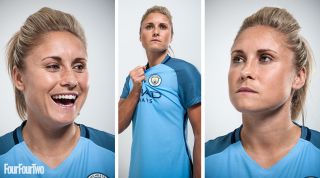 The 28-year-old defender, who skippered England to third place at the Women’s World Cup in 2015, won a Women’s Super League, FA Women’s Cup and Continental Cup treble with the Gunners, before agreeing to become one of several Three Lions internationals to link up with the new-look City in 2014.

Controversially reassigned from the second division to the first as part of the WSL’s expansion, the Blues finished fifth in a table of eight teams in 2014. But after being narrowly pipped to top spot by Chelsea 12 months later, Nick Cushing’s side have stormed to the title this year, winning 13 and drawing the other three of their 16 league games, and they completed the Double by tasting success in the WSL Cup.

Houghton says the difficult decision to walk away from the most successful club in English women’s football – winners of the league championship every year from 2004-12 – for an up-and-coming Man City side is now paying off.

Speaking exclusively in the December 2016 issue of FourFourTwo magazine, she says: “It was a risk. But when I signed, I knew the club wanted to win trophies, even if it might not be possible in the first couple of years. It has been a fantastic season. I won the league with Arsenal and that was an amazing feeling, but this one beats everything because I’ve seen how this club has changed over three years and how hard everyone has worked to get here.

“It was a risk worth taking. I knew I wanted to come here as a full-time footballer and better myself. I’ve had very good coaching here and I have developed as a player. I feel we are leading the way in this country now in terms of women’s football. The facilities are amazing, I have to pinch myself sometimes.

“Sometimes in women’s football, people say they can make it professional and they can provide this and that, but I believe anything that anybody says at this club because if there’s a promise, then nine times out of 10 it will happen.”

Read more from Steph Houghton, plus Kevin De Bruyne, John Stones, Raheem Sterling and Claudio Bravo, as we go behind the scenes at Manchester City in the December 2016 issue of FourFourTwo magazine and find out about the Blues’ plan for global domination. Also this month: 30 hair-raising tales from Alex Ferguson’s reign as Manchester United manager, when women were banned from football but still found a way to play, inside Southampton’s youth academy, on the road with Plymouth Argyle’s reserves, and a celebration of five long-serving football club employees – from turnstile operators to matchday DJs. Go get it, then subscribe!