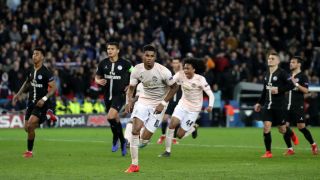 Manchester United reached the quarter-finals of the Champions League in stunning fashion after Marcus Rashford scored a last-gasp penalty to see off Paris St Germain.

Romelu Lukaku scored twice before Rashford kept his cool from 12 yards in added time after VAR adjudged Presnel Kimpembe had handled in the area.

Rashford scores brilliantly and bravely from the spot and @ManUtd are the first team in Champions League/European Cup history to lose at home by 2 goals in the knockout stage and go through in the 2nd leg. Wow!— Gary Lineker (@GaryLineker) March 6, 2019