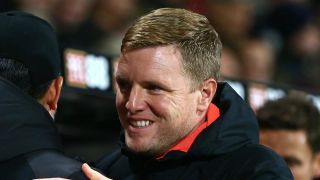 Bournemouth manager Eddie Howe admitted his side were not at their best as they resisted a Huddersfield Town comeback to win 2-1 at the Vitality Stadium, but said he hopes the win will prompt a return to "champagne football".

The result brought the Cherries' torrid run of four consecutive defeats to an end as Callum Wilson and Ryan Fraser contributed a goal and an assist each, with all Bournemouth's best attacking play coming in the first quarter of the game.

Despite seeing his side move up to sixth place in the Premier League, Howe admitted the hosts were "fortunate" to escape with all three points after Huddersfield pulled a goal back through Terence Kongolo and were allowed to dominate possession thereafter.

"It was nice to go 2-0 up but they had nothing to lose and played well. We defended well. Huddersfield do a lot of things well. You could say we were slightly fortunate but we deserve that.

"We scored two good goals and you think you can go on and put it to bed but it swung. I wasn't happy with the period from 2-0 until half-time. But second half we were more secure."

Picking out goalkeeper Asmir Begovic as his side's key player, Howe added: "Asmir was excellent. We needed a big performance and he has gone a long way to getting us the three points.

"A few weeks ago we were playing champagne football but we lost our mojo and hopefully this will bring it back."

Terriers boss David Wagner questioned the decision to give Bournemouth a free-kick in the fifth minute, which was taken by Fraser and led to Wilson's opener.

"This is very frustrating," said Wagner. "To make it clear I don't think we deserved anything because you need your defence and offence to work.

"It was Christmas for Bournemouth because we gave away chances – presents – at both ends of the pitch, even if performance-wise it was a top-class away performance.

"First goal was a referee decision again where I ask 'why was this a foul?'

"The most important thing is you have to know what to do better to get results. We have picked up some results but [in this game] it is easy – we can only blame ourselves for the first goal and goals change games."