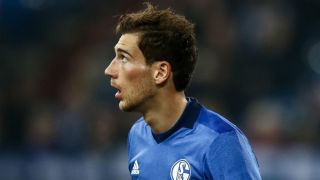 Goretzka had long been the subject of speculation after entering the final year of his Schalke contract in July 2017, with Bayern, Barcelona, Liverpool and Howedes' Juve all said to be interested.

Schalke attempted to convince Goretzka to sign a new deal with them, but ultimately the pull of Bayern proved too strong and it was confirmed he will join them on a free transfer at the end of the season.

Goretzka has since come in for criticism from some Schalke fans, who are not happy about the prospect of him playing for them having committed his future to Bayern.

A section of supporters unfurled a banner against Hannover which read: "Neither money nor trophies are worth more than our club! Anyone who does not understand that can p*** off immediately!"

But Howedes feels Goretzka is perfectly within his rights to think of his own needs.

"Aside from that, it's good that he's staying in the . Leon deciding to sign for is fantastic news." 19 January 2018

"I am always of the opinion that every player can pursue his own interests and goals," Howedes told Bild.

"If Leon sees his next career step in Munich, he is granted that. It is a pity for Schalke, because he is a great player who has always delivered. With him, the club also loses a great guy."

Howedes' final months at Schalke saw him cope with inner conflict, as coach Domenico Tedesco - who stripped him of the captaincy - told the club's academy product he would not be guaranteed starter anymore.

That ultimately resulted in Howedes becoming open to a departure, yet he harbours no ill will towards the 32-year-old, whom he praised for making a strong impact at Schalke.

"I have to accept it [the coach's decisions], even if I do not approve," Howedes said. "But for me, it is a climb, not a crash, to receive an offer from Juventus – one of the largest clubs in the world – in this situation.

"He [Tedesco] did not do everything right, but a lot of things he did do right, if you ask me.

"I think Domenico Tedesco is doing a great job. He has put Schalke back on the road to success. Now it is time to build on this, so that the club also at the end of the season reaches the goals in the cup and in the championship.

"Without the burden Europa League, there is much in it. As a fan, I am very happy about the successful first round."