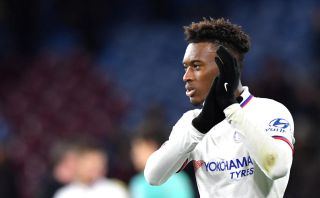 Callum Hudson-Odoi has revealed fears of repeating his Achilles tendon tear as he bids to hit back to his best.

Hudson-Odoi broke a four-month scoring drought by drilling Chelsea into the lead as the Blues eased past Nottingham Forest at Stamford Bridge on Sunday.

The Chelsea academy graduate has struggled to regain top form as he shakes off the after-effects of the serious injury but now believes he is finally approaching peak condition.

Hudson-Odoi was left clutching the troublesome right Achilles after a heavy tackle against Forest and has admitted the injury has played on his mind during his recovery.

“But now as days at training go by, I think if you’re confident and do your strengthening work in the gym, it will still be strong and nothing should happen to it again.

“I’ve been doing work every day with the conditioning coaches to ensure it’s strong enough and nothing else happens to it.

“I think I’m close to the point I was before. The player trod on my Achilles which was a bit painful but everything is alright.”

England forward Hudson-Odoi admitted he had been well aware of his goal drought but now hopes breaking that duck points towards a run of improved form.

“I have been a bit agitated, thinking to myself that I have had chances and I need to convert more of them, be more clinical in front of goal,” Hudson-Odoi told Chelsea TV.

“So in this game I thought to myself ‘Hit it low and hard’. Recently I have been thinking ‘Be patient, the goal will come if you be yourself, be calm, everything will go your way’.

“I am really happy that I got the goal and I am looking to build on it and keep going. It is not just about the goal, it is about helping the team, working hard, keeping the ball, and overall I am happy with how everything went.”