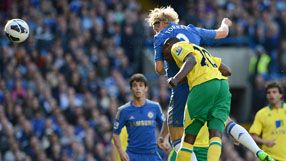 England international Osgood, who died of a heart attack in 2006 at the age of 59, was a tall, graceful number nine who notched 150 goals in two spells with the club.

He was the golden boy of the Chelsea side who lifted the 1970 FA Cup and 1971 European Cup Winners' Cup and such, is his popularity, that fans still sing his name at most games.

"I've been looking for the new Peter Osgood for a long time because he was the best," the 61-year-old Hudson told Reuters in an interview. "But I can see things in Torres's game which remind me of my old team-mate.

"He's got a nice stride like Osgood and as a goal-scorer and a goal-maker I think he's the closest thing we've had to him. I can't pay him a bigger compliment."

Torres made an inauspicious start to his Chelsea career after leaving Liverpool for a British record fee of 50 million pounds in January 2011.

The Spain striker struggled for goals and was unable to hold down a regular place in the side, with Didier Drogba first choice up front for last season's Champions League-winning campaign.

Drogba left for Shanghai Shenhua in June and Torres has flourished in his absence, scoring six goals in 12 games and starting every game for Chelsea this season.

"He didn't have many chances when Drogba was there and he lost his confidence but he's got it back now," said former England midfielder Hudson ahead of Chelsea's Premier League game at London rivals Tottenham Hotspur on Saturday.

"Torres is a great penalty-box player and he's great at holding the ball up. There's still a lot more to come from him and he's going to prove a lot of people wrong that questioned him.

"I think Torres will be the leading scorer in the Premier League this season if Chelsea can maintain their start," added Hudson who also had spells with Arsenal, Stoke City and Seattle Sounders.

Hudson is now disabled after sustaining life-threatening injuries when he was hit by a car while a pedestrian on a London street in 1997.

He does a lot of writing these days. The author of five books, the latest is a straight-talking account of his life called From The Playing Fields To The Killing Fields, available through Amazon.

In his playing heyday, Hudson was eloquence personified as a midfield general with silky skills, a great range of passing and a powerful engine.

The Chelsea-born Hudson said it was "not a good day for football" when the Stamford Bridge club won the Champions League in May with a team based on a defensive approach.

"England, for example, copied them when they went to Euro 2012," he explained. "They let the opposition have the ball and tried to hit teams on the break and I don't think that's a good thing.

"I've never seen such a one-sided match as the semi-final against Barcelona but when they came through, it told the Chelsea players they could go on and win the Champions League.