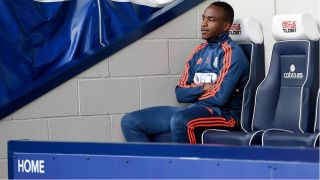 With Berahino unsettled at The Hawthorns under Hughes' predecessor Tony Pulis, Stoke are one club to be credited with an interest in the 22-year-old.

The England Under-21 international was at the centre of a public transfer saga involving Tottenham during the close-season and, while his future still seems to lie away from West Brom, Hughes refused to fuel speculation.

"I'm going to give the bog-standard answer really," he told reporters.

"You can't really comment on players from other clubs, we've got an interest in a number [of players].

"If we're in a position to try and progress deals we'll certainly do that. You wouldn't expect me to comment on individual players, so I'm not going to disappoint you."

While Berahino has been talked of as a possible arrival at the Britannia, Peter Crouch has been linked with a move away - Championship side Leeds United reported as a possible destination for the 34-year-old.

With the likes of Xherdan Shaqiri, Marko Arnautovic and Bojan Krkic impressing, Crouch has found opportunities limited but Hughes is keen to keep the former England man.

"My stance on it is quite clear, Pete is a big part of what we are doing here," added the Welshman. "We gave him a new contract [in January 2015] to emphasise that point but he's one who'll be disappointed - probably more than most - in terms of game time.

"But every game we play, he's always figuring in my thoughts albeit while not playing as many games as he would like.

"In comparison to this time last year he's way down in terms of appearances so I can understand people questioning him about his current situation.

"Of course [he is frustrated] but he wants to play and there's no reason why he can't and that's why we gave him a longer contract as we feel he can play at this level for a number of years.

"We're not encouraging anyone to come in, we've got a period now that is arguably as intense as the festive period so it's not a case of looking to get people out really."