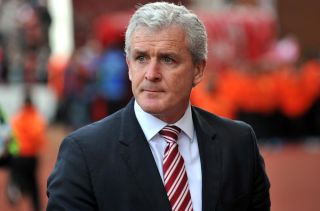 Stoke can also match their record points haul of 47 and Hughes believes surpassing that figure would allow the club to justifiably look back on their season with pride.

"If we are able to overcome a very good Spurs side then that would represent five successive home wins in the Premier League - something which I believe hasn't been achieved here before," said Hughes in a press conference on Friday.

"It would be fantastic to achieve that, and then hopefully go on to reach the other objectives that we have set ourselves for the season.

"As a team, it would be fantastic to make some history. If we were to win tomorrow then we will reach 47 points, and equal the club's best Premier League tally. Then we would have two games to surpass that total, which would be fantastic for us.

"We want to look back upon this season with pride and the lads have a chance to do that. You have to give the guys here a lot of credit, because if it wasn't for their attitudes and willingness to work and improve then we wouldn't be in this situation."

There had been mounting speculation that Tottenham players would refuse to shake the hand of Stoke midfielder Charlie Adam on Saturday, having been upset by a number of challenges made by the Scot in previous clashes with the London club.

However, Hughes added: "It never rang true right from the off, so we took the steps to speak to Spurs about it and they have assured us that there is absolutely nothing in it," he added.

"It's disappointing that things like this can be put out there, and at times allowed to spiral out of control."