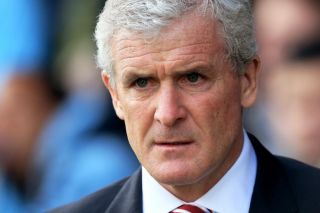 Hughes saw his side claim a 1-1 draw at Hull City on Sunday, captain Ryan Shawcross bundling in a late equaliser after the hosts had taken a first-half lead through Nikica Jelavic, despite being reduced to 10 men after just 14 minutes when James Chester was sent off.

The draw represented Stoke's first Premier League point of the campaign, following a 1-0 defeat at home to Aston Villa on the opening day.

Hughes has been busy in the transfer market in the off-season, with the likes of Bojan Krkic, Mame Biram Diouf and Victor Moses all arriving at the Britannia Stadium.

However, the Welshman does not expect to make any further additions before the transfer window closes on September 1.

"I don't anticipate going into the market for anything, but you never know, something might present itself - although I'd be surprised if it did," he said.

"We were quite happy with the targets that we tried to get at the end of last season; in terms of positional targets, we've been able to achieve that."

Stoke were unable to take advantage of Chester's early red card at the KC Stadium and although Shawcross secured a point, Hughes believes there is still plenty to come from his side - and ex-Barcelona forward Bojan in particular.

"It was difficult to find him in the second half, but I thought he did okay," he added.

"He showed glimpses of what he'll give us this year, but it's early days for us and we need more games to get us up to speed.

"Once we get everyone at the right level, I'll be able to pick teams on merit from what I've seen in matches and in training."