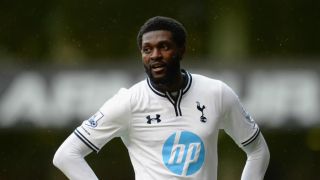 Stoke City manager Mark Hughes has revealed his admiration for Emmanuel Adebayor and admitted he tried to sign him before the striker eventually joined Crystal Palace.

Hughes managed the Togolese striker during his time as Manchester City boss and will face his former player in the FA Cup fourth round when his Stoke side take on Palace.

Adebayor has not played club football since May when his Tottenham contract was cancelled but Hughes believes the 31-year-old still has the ability to cause his side significant problems.

"We talked about Ade and his situation but he’s based in London," said Hughes.

"We knew early on that was where he was likely to end up, so we didn’t pursue it to any great extent other than a conversation. But he’s a good player.

"When he’s on top of his form he can be unplayable, he’s that good.

"He’s a big guy, with a lot of power who scores goals, that’s not a bad combination for a striker.

"I think they’ve made a good acquisition there."

The former Arsenal, Real Madrid and Manchester City attacker has an impressive scoring record in English football and Pardew claims he was excited at the prospect of adding real quality to his front-line.

"Once a player reaches that level, and they're bouncing around the big clubs, unless I become the manager of one of those I wasn't going to see him (at his club)," he said.

"But he's always been a player that I've always thought can disrupt games. He disrupts games, he can create a chaos factor, and you can't underestimate that in the Premier League.

"You need a player who's got x-factor, and for whatever physical shape he's in, he will create a moment that could change the game, any game, and that of course is why he's here."