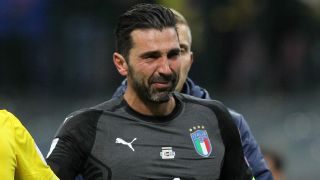 Gianluigi Buffon hinted that he would remain available to play for Italy, stating he could never reject a call from his country.

The veteran Juventus goalkeeper said after Italy's World Cup play-off final defeat to Sweden that his time with the international team was over after a 175-cap career.

Buffon was left in tears on the San Siro pitch after a 1-0 aggregate defeat meant the Azzurri would miss out on a spot at the global showpiece for the first time in 60 years.

However, the 39-year-old says he will always be available to answer his country's call should it come.

"I took a break from the national team, but I could never desert a possible call in the future if needed," he told reporters at the Gran Gala del Calcio.

"I'm of a certain age, so it's right for me to take a pause.

"With the way I am though, if there were a total absence of goalkeepers and they asked me to come back, I'd be there even at 60."

Buffon has previously said that this season will be his last unless Juventus win the Champions League, in which case he will stay on to play at the Club World Cup.