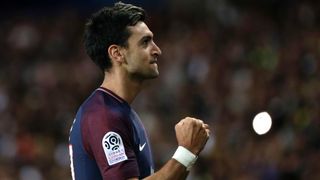 Paris Saint-Germain midfielder Javier Pastore says team-mate Thiago Silva was wrong to suggest he has asked to leave the club.

Neither Pastore nor Edinson Cavani have played in PSG's last two games after returning late to training from the mid-season break.

Silva suggested following Wednesday's 6-1 Coupe de France route of Rennes that Pastore had pushed for a move this month, only for the club to fail to find a suitor.

However, the 28-year-old insists he wants to stay at Parc des Princes for the rest of his career.

"I never spoke with T Silva about my problem or my future," he wrote on Instagram.

"I never put pressure on anyone. It's not my style.

"He doesn't know the problem I had that made me arrive late...

"I've always been loyal. It's not true that I want to leave I would like to stay here to finish my career."