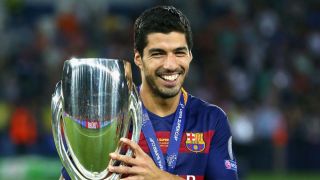 Luis Suarez says winning the treble in his first season at Barcelona justified his decision to leave Liverpool.

Suarez made the switch to Camp Nou from Anfield last year, and was rewarded with silverware as Barca swept the board last term.

Luis Enrique's side added the UEFA Super Cup to their bulging trophy cabinet on Tuesday, meaning Suarez has now won four major honours in a little over 12 months at the club.

"It was the right decision [to sign for Barca]," Suarez told Sport360.

"Winning trophies was a part of my decision in joining Barcelona, but also as a family we knew it was the right decision even before I won a trophy.

"I am very happy at Barcelona - I am at the best club in the world.

"It couldn’t have gone better, to achieve what we did in my first season was a dream."

And Suarez is eager to replicate last season's success.

He added: "If you look at some of the players here they have won trophies season after season, and that is my aim now.

"We enjoyed our moment last season, but now it is about a new challenge."