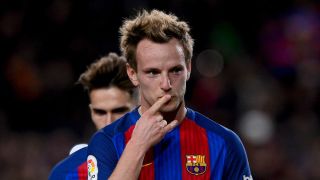 Ivan Rakitic has moved to end speculation over his Barcelona future by declaring he would "throw himself off a bridge" for Camp Nou boss Luis Enrique.

An integral part of the side that won back-to-back Spanish doubles over the past two seasons, along with scoring in Barca's 2015 Champions League final triumph, Croatia international midfielder Rakitic has found the going tougher this time around.

Rafinha and new arrival Andre Gomes have provided stern competition for his place in the side and the 28-year-old failed to feature in three consecutive LaLiga matches after being substituted with half an hour remaining in the 1-1 draw against arch rivals Real Madrid in December.

The former Sevilla man has been recently linked with a move to Manchester City, having previously voiced his admiration for the Premier League side's ex-Barca boss Pep Guardiola, but was rapturously received at Camp Nou when he came on as a substitute during Saturday's 5-0 demolition of Las Palmas.

And, in an interview with Football France, Rakitic insisted talk of a rift between himself and Luis Enrique could not be further from the truth.

"Luis Enrique has helped me enormously, giving me confidence straight away [after joining Barcelona in 2014], as did my team-mates, which enabled me to work calmly.

"It was Luis Enrique who asked the club to sign me.

"If I had to throw myself off a bridge for him, I would do it without hesitation. With just a look or a smile, he gives you the confidence necessary to succeed."

Rakitic's finest achievement in the 2014-15 season was to minimise the extent to which Barcelona missed Xavi as the club great and beating heart of their passing style wound down his celebrated career in Catalunya.

Nevertheless, the midfield schemer still made himself available to lend advice and a helping hand to his replacement.

"Xavi gave me a lot," Rakitic added. "I have just two words to say to him, it would be 'thank you'. The only thing I regret is to have played just a single season with him.

"I learned so much from him on and off the pitch, during our away trips, in the dressing room. I took advantage of every moment by his side during that season.

"What Xavi gave this club, his team-mates and the fans is unique."