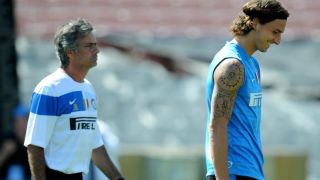 Ibrahimovic, 34, has reunited with Mourinho after signing a one-year deal with the Premier League giants.

The Swedish striker is often labelled arrogant, but his manager believes the former Paris Saint-Germain, Inter and Barcelona star is misunderstood.

"If you don't know him maybe you think some quotes a bit arrogant. He's just a funny guy. I would say that. Funny, winner and goalscorer.

"I was so happy to go for him and obviously he's happy to work with me."

Mourinho and Ibrahimovic spent a season together at Inter in 2008-09, winning the Serie A title.