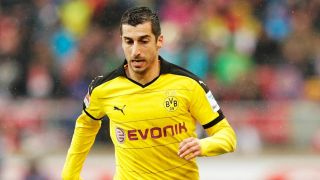 After three years of frustration, the arrival of Zlatan Ibrahimovic and Henrikh Mkhitaryan has made Manchester United instant contenders to win the Premier League.

United's post-Alex Ferguson era has largely been a story of lacklustre results despite big spending, although there are indications that could be set to change in 2016-17 under Jose Mourinho.

The appointment of a proven winner to replace Louis van Gaal as manager was the first sign a United revival was in the works. Now, two top talents have been brought in to significantly improve the tools at his disposal.

With Ibrahimovic a free transfer following the end of his Paris Saint-Germain contract and Mkhitaryan costing a fee reported to be £26.3million from Borussia Dortmund, United have added two players who can transform their fortunes for a combined figure similar to the market value of Watford striker Troy Deeney.

While that highlights the craziness of the domestic market in England, it also gives executive vice chairman Ed Woodward – with Mourinho's input – a rare moment of triumph after consistently struggling in the transfer market.

Even if missing out on Renato Sanches due to inaction suggests there is still more improving the club need to do, these two quality additions - who have not made a massive hole in the budget - are moves that have understandably got United's support excited.

In recent campaigns - aside from Anthony Martial, Juan Mata and Luke Shaw - United have made big-money splashes which have largely failed to pay off. Memphis Depay, Angel Di Maria, Marouane Fellaini, Ander Herrera, Marcos Rojo and Morgan Schneiderlin are all part of that long and largely undistinguished list.

Defender Eric Bailly, who cost £30m, may still need time to develop before becoming the finished article, but in Ibrahimovic and Mkhitaryan, The Special One has secured two proven top-tier talents who transform United's attack from day one.

We can confirm ! Read the full statement as completes his move: July 6, 2016

Ibrahimovic scored a stunning 50 goals for PSG last season and has won an astonishing 11 league titles in his career, as well as two more from his Juventus days that were revoked due to the Calciopoli scandal.

Mkhitaryan got 23 goals himself in all competitions in 2015-16 – with the 73 produced by those two more than all of those from Martial, Wayne Rooney, Mata, Marcus Rashford, Depay, Jesse Lingard, Herrera and Fellaini combined.

The former Sweden striker got either a goal or an assist every 60.9 minutes, with the Armenia playmaker also coming in at more than one a game (89.4 minutes). United's best performer in that category, Marcus Rashford, was well adrift at 141.3.

All of those numbers lead to the same conclusion - United have immediately got better in almost every attacking measure.

Mourinho now has two prolific, creative options who he can build his attack around. And with their fitness records also reliable – they both played more minutes than any of United's attacking players last season – he can aim to have a settled side in mounting a challenge for the league title.

As captain Rooney transitions to a midfield role and with Martial flying as a left-sided attacker, Ibrahimovic gives an instant world-class option at centre-forward.

Fans will demand England new boy Rashford is still given opportunities, but learning from the iconic Ibrahimovic could be a perfect scenario for the 18-year-old to develop. Europa League commitments and domestic cup competitions mean there will be plenty of opportunities for Mourinho to ensure the club's youth prospects get chances in a long campaign.

Mkhitaryan's versatility – he can play in any of the three positions behind a central striker in a 4-2-3-1 and potentially as a central midfielder alongside Rooney, or out wide in a 4-3-3 – also gives the former Chelsea boss a huge boost.

Mourinho has never been keen on slow re-building projects, while United's fans are also running out of patience following three straight seasons without a title challenge since Ferguson's retirement.

The Special One wants to win now and the additions of proven entities Ibrahimovic and Mkhitaryan, who should hit the ground running, ensure he has the chance to immediately take the challenge to Pep Guardiola and Manchester City.

There are still holes to fill further back in United's squad - with a midfield general required - but, in the space of a week, their attack has gone from uninspiring to one that matches their main title rivals, while a squad that finished fifth last season suddenly looks capable of so much better.

In what could be the most competitive Premier League season ever, Mourinho, Ibrahimovic and Mkhitaryan can spearhead a serious title challenge.