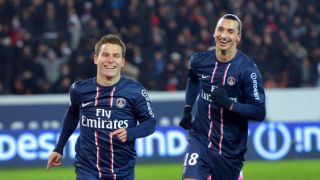 Kevin Gameiro had to move on from Paris Saint-Germain as Zlatan Ibrahimovic's arrival made it difficult for him to feature regularly for the French giants.

Gamiero joined PSG in 2011 off the back of an impressive spell at Lorient, scoring 11 goals in his debut season at the Parc des Princes.

However, the capital club opted to strengthen in an attack the following season by contracting the enigmatic Ibrahimovic in a big-money move from AC Milan.

Although Gameiro produced eight goals as the Swede's understudy, he started just seven of his 25 Ligue 1 appearances and subsequently transferred to Sevilla.

The Frenchman felt he could not compete with Ibrahimovic at PSG but has no regrets about his decision to move on.

"[Ibrahimovic's arrival] certainly did not help," Gameiro told Canal Football Club. "I experienced good and bad times. This is a club that meant a lot to me.

"I regret nothing, but we must move forward and that's why I went to Sevilla.

"In the life of a football there are difficult times. You must be aware, raise your head and keep moving forward."

The 28-year-old is enjoying a return towards some of his best form at Sevilla this term, scoring 11 goals in 18 La Liga appearances.

However, the striker admitted he would be open to a return to France with Marseille linked to his signature.

"I have not had any contact with them [Marseille], I read that in the newspapers," Gameiro added.

"A return to France? Why not, but for now I'm very well at Sevilla. We will see later."