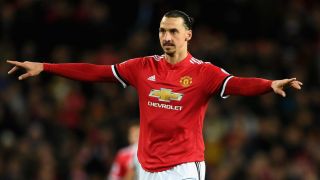 Los Angeles has emerged as a possible destination for 36-year-old Ibrahimovic, who is in the final six months of the contract extension he signed at United last August.

Ibrahimovic was linked with the Galaxy before he joined United from Paris Saint-Germain in 2016 and again prior to re-signing at Old Trafford following a serious knee injury suffered last season.

United manager Jose Mourinho said he would not stop Ibrahimovic from moving to the Galaxy, and responding to the speculation Tuesday, Schmid told LA Galaxy Insider: "There's been a lot of talk about it in the past and it's something that maybe gets opened up again.

"I don't know what's there. If there was something there, I'm sure we'd all know. Right now, it's all rumours."

Ibrahimovic scored 28 goals in all competitions during his first season at United last term, before an anterior cruciate ligament injury ended his campaign prematurely.

Knee problems have limited Ibrahimovic's appearances in 2017-18, with the Swede playing just seven matches in all competitions.

Ibrahimovic has not played since United's 2-2 draw against Burnley in December due to a problem with the same knee he injured in 2016-17.

The Galaxy, who have boasted David Beckham, Steven Gerrard and Robbie Keane in the past, failed to make the MLS play-offs last season.