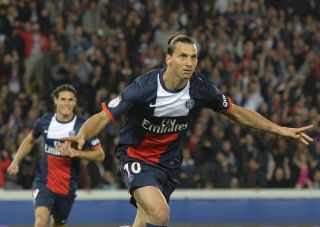 The Swedish forward will miss Friday's fixture at the Parc des Princes with the problem, as PSG go in search of a result that would extend their unbeaten league record to 23 matches.

Ibrahimovic has scored five goals in his 11 Ligue 1 appearances this season, while also starring in the UEFA Champions League.

In just three matches in Europe's premier club competition, the 32-year-old has netted six times, but he revealed he had been battling knee pain for much of the season earlier this month.

"Bleeding in the lower part of the thigh after an injury four weeks ago led to a slight irritation of the bursae and swelling in the knee joint," Ibrahimovic told digital app Zlatan Unplugged.

"The knee now looks completely healthy and good. Now it's all about getting the swelling down before I can run at full speed in training."

Ibrahimovic's return has not gone to plan though, with PSG announcing his injury as part of their official squad list for Friday's fixture.