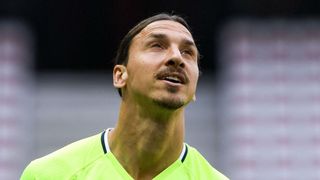 Zlatan Ibrahimovic marked his Manchester United debut in style by scoring a spectacular bicycle kick in a 5-2 friendly victory over Galatasaray.

It took less than four minutes for the Swedish striker, playing on familiar territory at Gothenburg's Ullevi Stadium, to open his account, acrobatically despatching an Antonio Valencia cross from the right.

Wayne Rooney (two), Marouane Fellaini and Juan Mata also found the net for United, but new boss Jose Mourinho will be disappointed with the defending for the goals from Sinan Gumus and Bruma that left his side trailing 2-1 at the break.

Ibrahimovic was partially responsible for Galatasaray's equaliser midway through the half, needlessly giving away a foul 10 yards outside his own box.

One-time United transfer target Wesley Sneijder whipped in the resulting free-kick and the unmarked Gumus was left with the simple task of nodding the ball past the helpless David De Gea.

For Galatasaray's second goal five minutes before the break, United were guilty of granting Bruma too much time and space on the edge of the box and the Portugal Under-21 international took full advantage by bending a superb shot into the far corner.

Mourinho responded by introducing Marcus Rashford, Fellaini, Ashley Young, Michael Carrick and Jesse Lingard at the start of the second half, with Ibrahimovic and Anthony Martial among those to make way.

And the changes paid off almost immediately as Rooney scored twice in the space of four minutes to turn the game on its head.

Rooney's first was a close-range finish after Valenica supplied a fine cut-back from the byline, while the second came from the penalty spot.

It was Rooney who played Rashford in and, when the teenage striker was hauled down by Galatasaray goalkeeper Fernando Muslera following neat footwork, United's skipper duly converted the spot-kick.

The Super Lig side were still reeling three minutes later when Valencia again got away down the right before picking out Fellaini whose back-post header looped in to make it 4-2.

Mata completed the scoring 15 minutes from time, taking advantage of some sloppy defending to turn home Carrick's low cross from three yards out.

Next on the agenda for United is Rooney's testimonial against Everton, followed by Sunday's Community Shield clash with Leicester City.