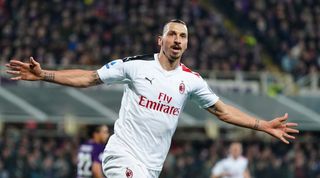 AC Milan technical director, Paolo Maldini, has confirmed that Zlatan Ibrahimovic will automatically be given a year's contract extension if the club qualifies for the Champions League.

Ibrahimovic signed a six-month deal with Milan in December, which included the clause for the 38-year-old should they end their six-year absence from Europe's top club competition.

"There's a six-month contract with an automatic renewal clause in case we reach the Champions League," Maldini was quoted by the Daily Mail.

"Otherwise, we'll put ourselves round the table with him. With Ibra, there must always be an open dialogue and this exists, otherwise he would not have come in the first place."

It was seen as something of a sign of desperation when Milan re-signed Ibrahimovic at the end of last year. At the time they were in the bottom half of the table and closer to the relegation zone than leaders and rivals Inter Milan.

Yet they have lost just one of their nine matches that Ibrahimovic has played in all competitions since then, rising to seventh in Serie A. The Swede has scored three goals during that time.