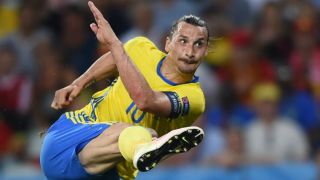 Zlatan Ibrahimovic has been named in Manchester United's squad to face Galatasaray in Gothenburg on Saturday, but there is no room for Bastian Schweinsteiger.

The former Sweden captain missed United's visit to China for the International Champions Cup, but is in line to make his first appearance for Jose Mourinho's side in his home country.

Schweinsteiger, however, has been omitted from the 23-man squad, intensifying speculation that he will leave the club in the transfer window.

Widespread reports have claimed that the former Germany captain, who announced his retirement from international football on Friday, has been told by Mourinho that he is not in his plans for the coming campaign.

Adnan Januzaj, Andreas Pereira, Cameron Borthwick-Jackson, Paddy McNair, Will Keane and Timothy Fosu-Mensah were also among the players reportedly encouraged to find new clubs and none of them have been named in the party travelling to Sweden.

Axel Tuanzebe, who impressed Mourinho in China, has also been left out.

Anthony Martial, Morgan Schneiderlin, Marouane Fellaini and Matteo Darmian have been named in the squad after being given extended holiday following Euro 2016.