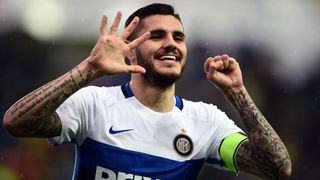 Mauro Icardi's absence from Inter's friendly with Estudiantes was because of injury and not due to ongoing transfer talk, claims Roberto Mancini.

The Inter captain did not feature against Paris Saint-Germain on Sunday, and was again missing for Wednesday's 1-1 draw with Estudiantes in New Jersey.

Icardi has been strongly linked with a move to Napoli following Gonzalo Higuain's big-money transfer to Juventus, but Mancini insists his forward was left out due to a shoulder problem.

"I didn't field him because he reported feeling some pain in his shoulder this morning. There would have been no point in risking him," said Mancini, who also brushed aside speculation linking his club with a move for Lazio's Antonio Candreva.

"Candreva is a Lazio player, not an Inter one," he added.

Mancini went on to field questions about his future, following suggestions of a strained relationship with the club's new Chinese owners.

"You're the ones who talked about a resignation, not me," he told the media.

"I never said that there's tension or that I'm leaving. I'm here and I'm working to improve Inter. I'm giving it everything I've got to make that happen."