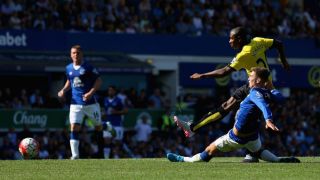 Nigeria international Ighalo initially arrived at Vicarage Road on loan from La Liga side Granada at the start of last season, a move that was made permanent three months into the campaign.

And Ighalo's deal has now been extended until 2020, with the 26-year-old having opened his Premier League account in Watford's opening-day draw at Everton.

Ighalo has scored 21 goals in 42 appearances for Watford - 13 of those coming in just nine games at the start of 2015.