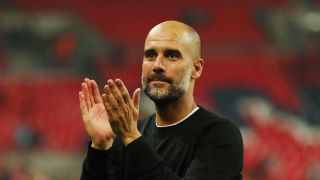 An undermanned City fell to back-to-back ICC defeats after succumbing to a 94th-minute Sadio Mane penalty in New Jersey midweek.

But City were pegged back within six minutes after Mohamed Salah came off the bench and equalised, before Mane converted a spot-kick at the death.

City manager Guardiola, however, could not be prouder of the record-setting Premier League champions post-match.

"It's incredible what we have done," Guardiola said. "The first 75 minutes, against this team which fought for the Champions League last season, I am so, so proud. I am happy to be manager of these guys for this reason.

"For 75 incredible minutes, the players were so tired but worked so hard and for the last part of the game Liverpool brought on incredible quality and deserved to score the goals in the end.

"But our performance was incredible; first half, players with an average age of 18, 19 years old, it was so good."

"We don't think about that, we just try to make the best of it. It is what it is; I learned that when I was a little boy in Barcelona, you don’t find excuses, you just play," Guardiola added when asked about City's preparations with their regular starters. "We are happy. We have 16 players out because our players play for the best international teams in the world. That is a good example for the club.

"We are going to adapt, simple as that. We will see which players we have for the final against Chelsea, how many players and in which condition, we will see, and then comes the start. We are late, we know it, but if we play like we did today, with this spirit against an amazing team, the future will be so good."

Meanwhile, the state of the pitch in New Jersey scuppered Guardiola's plans of fielding centre-back Aymeric Laporte, with the City boss saying: "Laporte, the second day in Manchester he had a little problem with a sore wrist. Now he's in perfect condition, he trains with us but we didn't want to take a risk with him on this pitch because we need players for the beginning of the season."