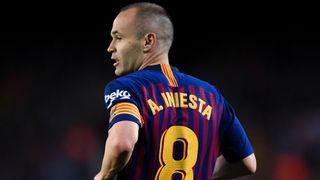 Andres Iniesta has been described as "the most talented player in the history of Spain" by his former Barcelona team-mate Xavi.

Xavi departed Camp Nou to similar acclaim in 2015, and has written an open letter paying a moving tribute to his old midfield colleague.

"For me Andres is the most talented player in the history of Spain," Xavi wrote.

"He is a blessing for his team-mates. This is what it means to have personality, to be a real leader. A quiet leader, but an authentic leader.

"As a natural pass-maker all my life, I needed players like Andres, like Leo [Lionel Messi], like [Sergio] Busquets. They have been the best partners imaginable, always giving me an option even if the situation looked difficult.

"I don't know how, but Andres always appeared to me in the right moment. 'Look, I'm here!' But he didn't tell it to me by speaking. We never spoke much on the pitch in over 10 years playing together. It wasn't necessary. We understood each other with a look.

"Sometimes, I have the impression that you cannot explain in words what Andres represents as a player.

"He does everything with such ease that you think anyone can do it. But no one can do it like him. On the pitch, he is transformed. That's where his real personality appears. He is in his natural habitat."

Xavi has been playing for Al Sadd in Qatar since leaving Barca, and the 38-year-old expects Iniesta to recognise the scale of his impact and achievements as he prepares for a new challenge.

"Now that I am a little away from elite football, I realise what Andres is and what he represents," Xavi wrote.

"When he leaves Barcelona, he will understand what I mean. He has won everything, played in an incredible way, and is respected in the whole world.

"He is leaving in the way he deserves, because he never had a bad word or gesture for anyone. Look at how he is loved across the world.

"Soon you will really know and appreciate what you have done for football, my friend, Andres."