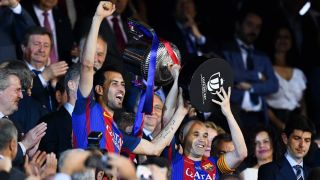 Barcelona captain Andres Iniesta says he needed help to lift the massive Copa del Rey trophy as he explained why Sergio Busquets joined him in holding the silverware aloft.

Iniesta added that Busquets, the club's third captain behind him and Lionel Messi, could do with practice of lifting trophies for when he eventually assumes control of the captain's armband.

Barca sealed their third consecutive Copa crown with a 3-1 win over Alaves on Saturday, an accomplishment the skipper believes should be given proper acknowledgement.

"I was needing help – there is nothing different on the horizon," Iniesta told reporters when asked about Busquets' role in the trophy lift.

"But it is good that Busi gets used to [lifting trophies] for the future.

"A final is a final and it is always difficult to win them. Even though we were favourites, these games are always tough.

"We are happy because we reached the aim of ending the season with the Copa.

"We are required to play well, but also to get results. We didn't do great in the other competitions and we were punished...

"But this is our third Copa del Rey in a row and that must be valued. We keep winning and claiming titles.

"Next year we will try once again, with some new arrivals and with some people having departed. That is the challenge."

The match at Vicente Calderon, which saw Lionel Messi, Neymar and Paco Alcacer strike for Barcelona, was head coach Luis Enrique's last in the role.

The 47-year-old bowed out with nine trophies to his name from three seasons at Camp Nou.

"He arrived at a delicate time and his record has been more than positive," said Iniesta.

"Now we will keep trying to win every year."