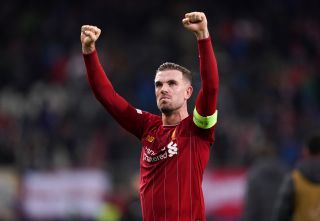 Liverpool manager Jurgen Klopp insists Jordan Henderson has to have the honour of lifting the Premier League trophy out of respect for his contribution to the club.

The England midfielder’s season has been ended by a knee injury sustained in Wednesday’s win at Brighton, but he will not require surgery.

And the plan is for him to be on the podium to celebrate the club’s first title in 30 years at the final home match against Chelsea later this month, capping a phenomenal 13 months in which he has lifted the Champions League and Club World Cup trophies.

@LFC manager Jurgen Klopp said @JHenderson's knee injury is the "best possible of all bad news" and the Reds captain will be present to lift the Premier League trophy at Anfield later this month. pic.twitter.com/350TZMrTYc— Carl Markham (@carlmarkham) July 10, 2020

On Friday, Henderson marked five years since he succeeded Steven Gerrard as club captain and Klopp believes the midfielder deserves the recognition, although whether he dons full kit like a suspended John Terry did for Chelsea’s Champions League final celebrations in 2012 has not been decided.

“Get him out of the tracksuit? I don’t know yet, we will do everything that is possible to do it the right way. He is absolutely one of the great captains of this club,” said the Reds boss.

“I have no idea what will be the rule. If you are not in the starting line-up – which will be difficult for Hendo – then I don’t know what we will do.

“We really thought – for the role he played the last years now – he deserves to be in that spot at that moment (when Liverpool lift the trophy).

“So we will find a solution that shows the respect absolutely for what he did.

“All the boys want that by the way. They all want him to be there and that was one of the first things I heard after we won the league.

“Virgil (Van Dijk) told Hendo ‘The shuffle, you can do the shuffle again’ (referring to Henderson’s now trademark little dance with his feet immediately before the trophy lift).

“I am not sure if he is able to do the shuffle now but that is the biggest problem.”

Henderson is determined to come back stronger, writing on Instagram: “Of course it’s not the way I’d have preferred to have finished the season on a personal level.

“I’m sure the lads will ensure we finish the season off on a high.”

Liverpool host Burnley on Saturday looking to extend their unbeaten home league run, which stretches back to April 2017, to 58 matches.

They have a 100 per cent record at Anfield this season and are aiming to become the first team since Brentford (21 out of 21) in Division 3 North in 1929-30 to win every home league game of a season.

Jürgen Klopp saluted @MoSalah's ‘crazy’ numbers with our No.11 on the brink of yet another goalscoring milestone… 🔴✨— Liverpool FC (Premier League Champions 🏆) (@LFC) July 10, 2020

There are other records to chase as the Reds – currently on 92 points – have Manchester City’s 100-point tally in their sights, while on the individual front Mohamed Salah is looking for a third successive Golden Boot, sitting three behind current Premier League leader Jamie Vardy.

Salah needs just one goal to become the first Liverpool player since Roger Hunt in 1965-66 – and only the fourth in the club’s history – to register 20 league goals in three successive seasons.

The Egyptian has scored 73 goals and made 27 assists in 104 league appearances for Liverpool.

“Mo now, of course, come on. The numbers are absolutely crazy,” added Klopp.

“Involved in 100 goals since he is here, 73 and 27, it’s just outstanding. World-class numbers. Nobody should be surprised any more.”