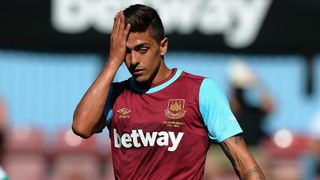 West Ham midfielder Manuel Lanzini has been ruled out of the Olympics due to a knee injury, the Argentina Football Association (AFA) has confirmed.

The Premier League club stated on Monday that they were in touch with the Argentina camp over the 23-year-old's condition after he took a knock in a warm-up match against Colombia last Saturday.

Lanzini is now set to return to London for treatment after it was determined that the injury was too severe for him to compete in Rio de Janeiro.

"Manuel Lanzini was discharged from the squad to play in the Olympic Games in Rio due to injury," an AFA statement confirmed.

"The West Ham man will stay in Miami, from where he will depart directly for London.

"The necessary procedures have been put in place to call up Boca Juniors player Cristian Pavon, who is part of the reserves for the initial list, as his replacement."

West Ham will be hoping Lanzini can make a swift recovery after full-back Aaron Cresswell was ruled out for up to four months on Monday with a knee ligament injury.